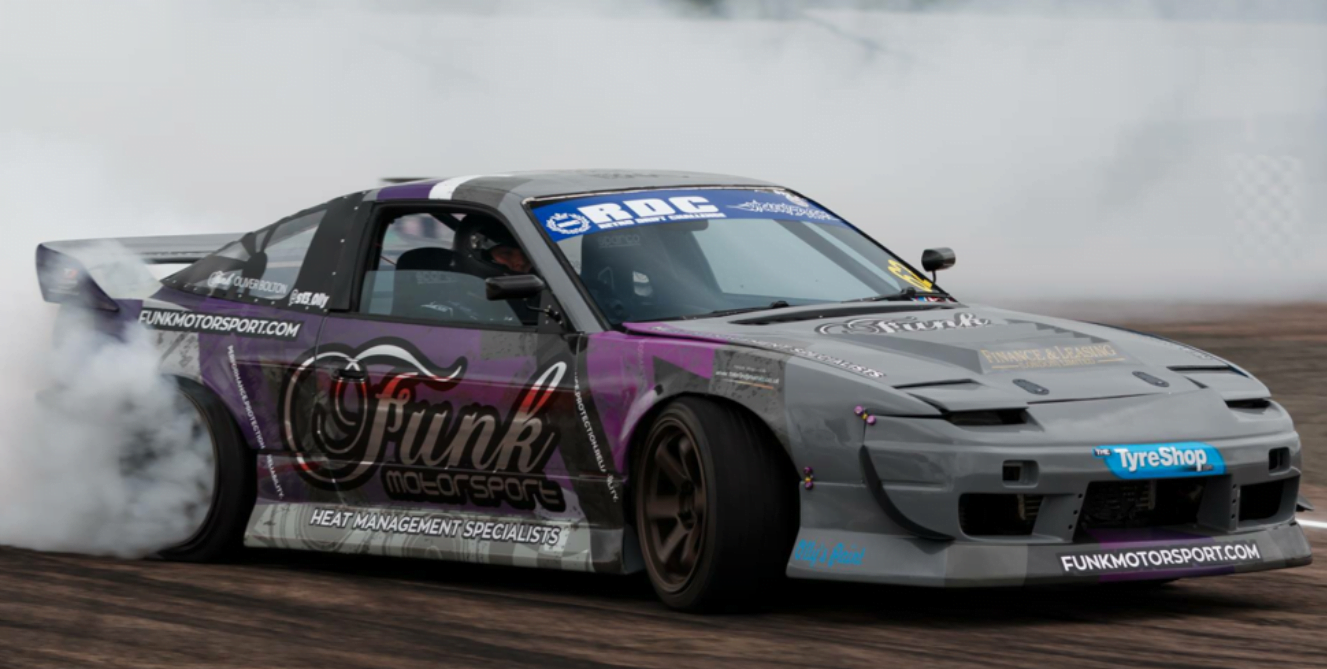 Oliver Bolton talks about his journey into the 2017 drift season and joining forces with Funk Motorsport! After a few long months testing, tweaking and re-painting the S13 for a fresh new look for 2017, we were finally ready for the season ahead. With our new car livery and sponsorship from Funk Motorsport, this season looks to be a very exciting one!

With an aim of competing in the RDC and Drift Cup it was important for Oliver to get as much seat time as possible before the season had begun. With an end goal of competing in the BDC, it would be a tough first year drifting in the S13, with an uncertainty of Oliver’s capability behind the wheel of his new drift car. With plenty of seat time behind him, and his confidence levels rising, it was time for his first event of the season.

Round 1 of the Retro Drift Challenge.

‘After a short hour and a half drive to Santa Pod we arrived to a very busy paddock with a mix of well-prepared cars. After the drivers briefing, we walked the track listening to the judges telling us what they would be looking for. At this point, no clips were down, so this proved to be extremely helpful, the track was short but complex. I was really looking forward to the day ahead! I made my way back to the car and lined up ready to go!

Throughout the first couple of runs, we really struggled with the tight first left before the twin, I tried keeping up with the various well-prepared cars but really struggled. It was time for a change. We quickly changed the shock settings and replaced the rear tyres again and got straight back out on track. This time the car felt much more responsive and could stay with my twinning run. Before long, lunch was upon us and practice was over. Even though I had been out on track for a few hours, it felt like just minutes. It was then time to walk around the paddock. I was amazed with the array of old and new cars, a V8 super charged Scooby, BDC pro-am Driver, Martin Wannacott in his awesome Chaser, Simpson in a wicked ford pop and of course Hendrickx in his Volvo. The main stream of Bmw’s and Nissans dominated the paddock, all ready for the start of qualifying.

Tyre pressures all set, it was now time for a qualifying run. Our first run was ok, not too quick, close to the clips, but I could do better. Second run was much the same, if maybe a little better. As I watched on, the rest of the drivers put their laps in and I became unsure on whether I had made the top 32. With the judges deciding to re -run a few qualifying laps, I became even more confused if I had made it or not. After much deliberation, they announced the top 32, as the numbers fall so do I, as I became ever more certain that I had not made it. Suddenly, I breathed a sigh of relief as I heard, “14th place Oliver Bolton” over the loudspeaker.

Top 32 Battle against Martin Griffiths and his Z4.

At this point it was all or nothing. Martin had been consistent all morning and I knew I had to be quick and not miss a clip on both lead and chase runs. Martin was on point but I was just slightly quicker on my lead run.

Top 16 Battle with Tom Hutchinson and his E36.

I was battling nerves and excitement at this stage. I knew Tom would be quicker in the first 2 bends so I had to pull it back at the second half of the track, I was not sure who did what but managed to get through!

Top 8 Battle with Zanna Young and the E36.

Still buzzing but up against some one I have seen before at Teeside, I was sure this would be a close battle. During the Chase run I had managed to stay with Zanna and on clip. During the lead run I managed to make a gap, so made it through to the top 4!

Top 4 Battles against Fritz Henderix and his Volvo 360.

I had now made the final. I was extremely happy. It was now time for the final, alongside Daryl Jones and his S13.

With Daryl and team JBR, they were quick and aggressive so I needed to match their approach. During the chase run, I stayed with Daryl hitting the clips until the last bend when my drive shaft gave way. Needless to say, that was the end of my awesome weekend.

I would like to say a huge thank you to Gordon @RDC for an excellent well-run day, all the competitors for the support and congratulations to Daryl for the win.

The broken drive shaft turned out to be the diff. Time to head over to Garage-D to pick up a new one!

Next round: Round 2 Drift Land, Scotland

A big thank you to Funk Motorsport for all your support and sponsorship.’